Hot Chocolate are a British soul band popular during the 1970s and 1980s, formed by Errol Brown and Tony Wilson. The act had at least one hit every year from 1970 to 1984, and their song "You Sexy Thing" made the Top 10 in three decades.[3]

Formed in 1968, the band initially consisted of vocalist Errol Brown, guitarist Franklyn De Allie, drummer Jim King (shortly thereafter replaced by the unrelated Ian King), percussionist Patrick Olive, and bassist Tony Wilson;[4] with keyboardist Larry Ferguson joining the band in the following year.[5] The band was originally named "Hot Chocolate Band" by Mavis Smith, who worked for the Apple Corps press office. This was quickly shortened first to "The Hot Chocolate" and then to "Hot Chocolate" by Mickie Most. By 1970 the band's line-up had changed again to include Harvey Hinsley and Tony Connor (who was also a member of Audience at the time) replacing De Allie and King respectively.[4]

Hot Chocolate started their recording career making a reggae version of John Lennon's "Give Peace a Chance", but frontman Errol Brown was told he needed permission. He was contacted by Apple Records, discovered that Lennon liked his version, and the group was subsequently signed to Apple Records.[6] The link was short-lived as the Beatles were starting to break up; and consequently the Apple connection soon ended.

Later in 1970 Hot Chocolate, with the help of record producer Mickie Most, began releasing tracks that became hits, such as "Love Is Life", "Emma", "You Could Have Been a Lady" (a U.S. and Canadian hit for April Wine), and "I Believe in Love". All those releases were on the Rak record label, owned by Most. Brown and bassist Tony Wilson wrote most of their original material, and also provided hits for Herman's Hermits, "Bet Yer Life I Do", and Mary Hopkin, "Think About Your Children".

It was in the disco era of the mid-1970s that Hot Chocolate became a big success. A combination of high production standards, the growing confidence of the main songwriting team of Wilson and Brown, and tight vocal harmonies enabled them to secure further big hits such as "You Sexy Thing" and "Every 1's a Winner", which were also U.S. hits, peaking at #3 (1976) and #6 (1979), respectively. "Every 1's a Winner" featured a distinctive distorted guitar riff by Harvey Hinsley using a Roland GR-500. After Wilson's departure for a solo career, that included a 1976 album I Like Your Style, Brown assumed all songwriting duties. Wilson was initially replaced by Brian Satterwhite; before Satterwhite departed the band and Olive switched to bass as his primary instrument.[4]

In 1977, after 15 hits, they finally reached Number One with "So You Win Again". It was one of the few of their recordings that was not written, at least partly, by Brown.[7] The track was a Russ Ballard composition.[7]

The band became the only group, and one of just three acts, that had a hit in every year of the 1970s in the UK charts (the other two being Elvis Presley and Diana Ross).[7][8] The band eventually had at least one hit, every year, between 1970 and 1984.[3] Critically, they were often lambasted or simply ignored, and apart from compilations their albums such as Cicero Park sold modestly.

Its renewed appreciation can be credited in part to its appearances in a string of successful films starting with the 1997 comedy The Full Monty, and in a 1989 acne lotion commercial (featuring a young Patsy Palmer).[9] From the late 1980s onwards the group experienced a resurgence of credibility: Urge Overkill, PJ Harvey and the Sisters of Mercy all added Hot Chocolate songs to their live sets,[10] and Cud's cover of "You Sexy Thing" featured in John Peel's Festive 50.

Errol Brown and Larry Ferguson departed the band in 1986; ultimately leading the group to disband. Brown then began a solo career. Two of his singles made the UK Singles Chart - "Personal Touch" and "Body Rockin'". Hot Chocolate had a hit in 1988 in Germany. "Never Pretend" was written by Harvey Hinsley and Susan Stuttard, and the vocalist was Grant Evelyn.[11] The band's enduring popularity was verified when two compilation albums both reached #1 in the UK Albums Chart (see below). In 2003, Errol Brown received the MBE; and in 2004, the Ivor Novello Award for his contribution to British music.

In 1992 the band reformed with new vocalist Greg Bannis and keyboardists Steve Ansell, Andy Smith, Willy Dowling, and Steve Matthews (the latter two of which departed the band in 1994), and manager and agent Ric Martin took control over the band's bookings and live appearances.[12] Kennie Simon took over lead vocals in 2010 following the departure of Bannis and Hot Chocolate continue to make live appearances in the UK and Europe.[13]

On 6 May 2015, original frontman and principal songwriter Errol Brown died from liver cancer. He was 71.[14] 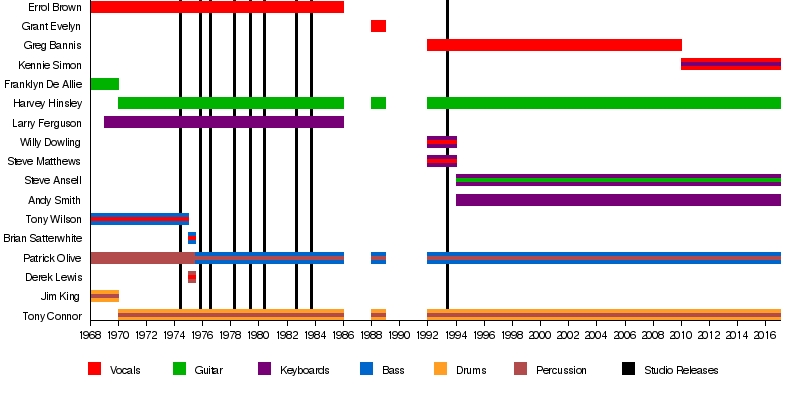 Script error: No such module "main".

All albums released by Rak Records unless otherwise noted.

Script error: No such module "Check for unknown parameters".

Retrieved from "https://culture.fandom.com/wiki/Hot_Chocolate_(band)?oldid=14180"
Community content is available under CC-BY-SA unless otherwise noted.